Normally I like to avoid all drama and controversy, but I honestly feel as though this is something that needs to be said.

It has recently been brought to my attention that there have been things being said about me behind my back with respect to my appearance, and I know that I am not alone. This kind of thing happens every single day, to thousands of women around the world. It is honestly baffling to me that people can be so catty and cruel over something so trivial. Why do we care about the height of the shoes someone is wearing, or the fact that someone wears makeup in an office of people that typically don’t wear much makeup? Unfortunately, we live in a world where it isn’t easy to just be yourself and do what makes you happy – because someone will always be there to try and bring you down.

I’ve noticed that both women and men alike are guilty of this kind of negative behaviour, so it is not just any one gender. Agree or disagree, that is your prerogative. However, these are my thoughts:

Ladies; If a woman takes pride in her appearance, wears makeup, dresses well, wears heels, whatever the case may be; it by no means correlates to her being sexually promiscuous. Sure, some people that do those things probably would fall into that category. However, I know from personal experience that it is quite possible for someone to NOT be a “slut” and to still take pride in their appearance. In my case, I do it because I lost 60 pounds. I am confident again and I feel better about myself, so I like to demonstrate that in the way that I carry myself and the way that I dress. The moral of the story here is that until you take the time to get to know a person, you have no right to make snap judgments about them based solely on appearance. I know, it is cliche, but you should not judge a book by its cover. We, as women, need to STOP the judging and bringing each other down. There are enough men out there in the world that take care of that for us lol. Instead, we need to be raising each other up. We need to be a positive force in each others’ lives, and start being there for one another. Life is not a competition, nobody has to win or lose, so lose the edge and just LIVE.

Gentlemen; If a woman takes pride in her appearance, wears makeup, dresses well, wears heels, whatever the case may be; it does NOT mean that they are dressed that way to get your attention or approval, nor does it mean that you automatically have the go-ahead to push yourself onto her in any way. Honestly, I don’t go out to clubs very often, but when I do I usually find myself getting annoyed with at least one man who thinks that it is his god given right to lay a hand on me just because I am dressed nicely and at a club. It actually infuriates me to have a stranger come up from behind me and start grinding on me at a club. I just don’t understand the notion that it is okay to grind on a total stranger without at least introducing yourself and saying “Hey, do you want to dance?”. Six simple words – how hard is that? I’m sorry, but contrary to common belief, not every woman at a bar is there to find a man to sleep with. Some of us actually go just to dance, have a good time, and blow off some steam with some friends. Once again I revert back to the cliche, because you do not know the story behind every woman. My story involves a significant amount of weight loss. The other day I was talking to a guy, and somehow we got on the topic of appearance. I learned that he actually thought that the only reason women dress well or do their hair and makeup nicely was to please men! WRONG. Once again, obviously there will be exceptions to this and there will be women out there that do those things to please a man. However, in a lot of cases, we do it for ourselves.

For example, I didn’t lose a bunch of weight to please a man. I lost that weight because I was sick of living with depression and isolating myself from the world and everyone around me. I wanted to take my life back, regain my confidence, and start truly LIVING. I do not NEED a man, and as women, none of us do. We are strong, and we can get by without a man. In today’s society, I feel like more and more women are reverting back to old traditions and relying on men to take care of them; so much so that they are staying in dead end relationships. I am a firm believer in true love. I have zero interest in staying in a relationship with someone if I know that it is going nowhere, because it isn’t fair to you or the other person to keep pretending. Sometimes the hardest choice is actually the right choice, and though it isn’t easy to leave a bad relationship, sometimes it is exactly what you need to find yourself again.

I apologize for a bit of a rant, but I have been thinking a lot lately about these kinds of things and I felt as though I needed to get it off of my chest. I wish I knew where chivalry had gone, because I want it back! Drama and cattiness has been around for ages, and I doubt that will change anytime soon. However, if this message reaches even just one man or woman and helps him or her to change their behaviour in a more positive light – it has served its purpose.

Be kind to one another, because you never know what a person could be going through. 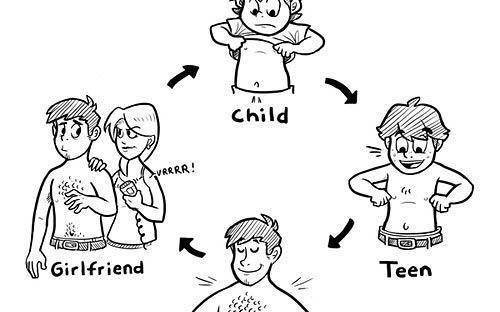 I actually would like to add an image to this cycle for the fitness guys! The next step brings the guy back to the beginning with a bare chest.

Since I started going down this path with Beachbody to get fit and healthy, I have come into contact with a lot of people who have success stories already. Many of them are men, and I have noticed a pattern when looking at before and after pictures: they almost always seem to have bare chests once they have reached their goals.

Now I wonder, is this because of a girlfriend, or just personal preference? Anyone wanna put in their two cents on this? I am genuinely curious! haha